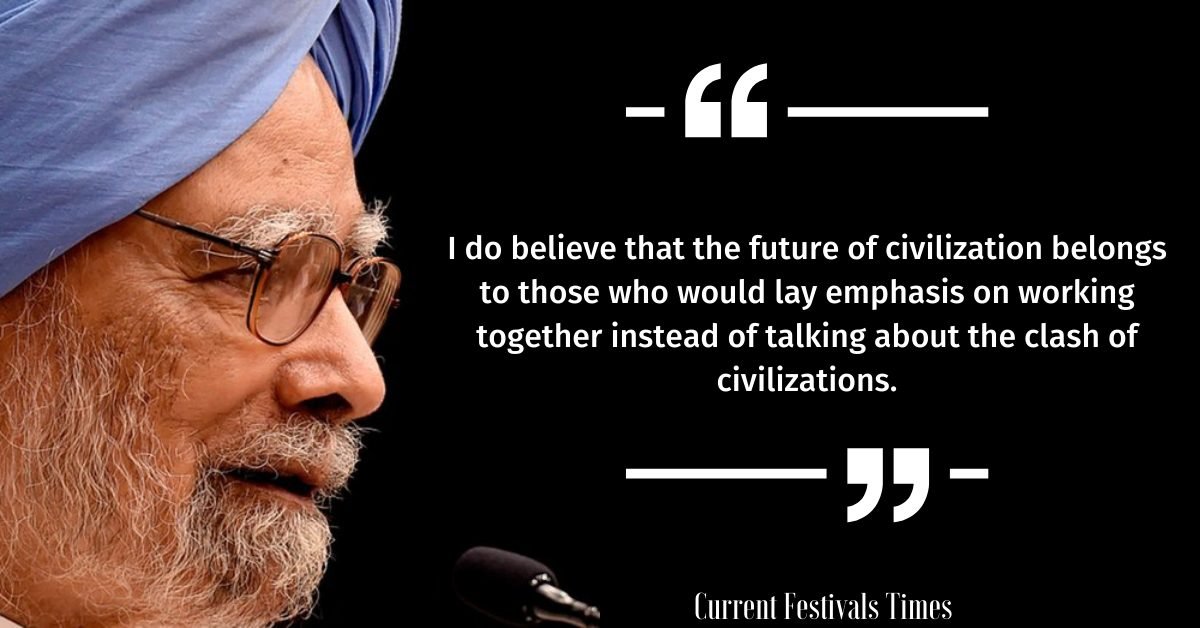 Manmohan Singh is a renowned economist who greatly helped in boosting the GDP of India with his knowledge & excellence in Finance. He also served as the 13th Prime Minister of India and is the first Prime Minister to be re-elected after completing a full five-year term, which further says about the popularity of this Prime Minister. So, let’s see the 33 Most Inspiring Manmohan Singh Quotes that will introduce you to his great thoughts about India as a Former Prime Minister & will guide you on your way to success.

“I do believe that the future of civilization belongs to those who would lay emphasis on working together instead of talking about the clash of civilizations.” ~ Manmohan Singh

“No power on earth can stop an idea whose time has come.” ~ Manmohan Singh

“No nation, no society, no community can hold its head high and claim to be part of the civilized world if it condones the practice of discriminating against one half of humanity represented by women.” ~ Manmohan Singh

India happens to be a rich country inhabited by very poor people.

Life is never free of contradictions.

Also, See – 15 Top Dhyan Chand Quotes that will Inspire You!

I can assure you we are a responsible nuclear power.

We all know the epicenter of terrorism in the world today is Pakistan. The world community has to come to grips with this harsh reality.

Nepal is our closest neighbor, and we must make every effort to ensure that, as a small neighbor, we attend to their perceptions. Even when they are wrong, we have an obligation to create an environment in which the common people in Nepal feel that in India they have a great friend.

A victory for the Taliban in Afghanistan would have catastrophic consequences for the world – particularly for South Asia, for Central Asia, and for the Middle East.

No power on earth can stop an idea whose time has come.

“Capitalism historically has been a very dynamic force, and behind that force is technical progress, innovation, new ideas, new products, new technologies, and new methods of managing teams.” ~ Manmohan Singh

“India is this great experiment of a billion people of such great diverse persuasions working together, seeking their salvation in the framework of a democracy. I believe it will have some lessons for all the multicultural societies.” ~ Manmohan Singh

“Those who create wealth should be shown the greatest respect.” ~ Manmohan Singh

“I do believe that India needs a lot more foreign direct investment than we’ve got, and we should have the ambition to move in the same league many other countries in our neighborhood are moving. We may not be able to reach where the Chinese are today, but there is no reason why we should not think big about the role of foreign direct investment, particularly in the areas relating to infrastructure, where our needs for investment are very large. We need new initiatives, management skills, and I do believe that direct foreign investment can play a very important role.” ~ Manmohan Singh

“Meaningful solutions to the problems of mass poverty that prevail in India I believe can only be found in the framework of an expanding economy.” ~ Manmohan Singh

“Yes, I think India’s economy always has been a mixed economy, and by Western standards, we are much more of a market economy than a public sector-driven economy.” ~ Manmohan Singh

“The first and foremost priority is to finish the unfinished task which the founding fathers of India set out for us at the time of our independence: to get rid of chronic poverty, ignorance, and disease, which have afflicted millions and millions of our people.” ~ Manmohan Singh

“The premature migration of very large numbers of people from rural areas to urban areas can give rise to a lot of strains to the urban infrastructure, which can also create problems of crime – law-and-order problems.” ~ Manmohan Singh

“What India needs most is a unified food law.” ~ Manmohan Singh

“Nobody should be allowed to tinker with democracy. We will not discontinue the good works of the past government.” ~ Manmohan Singh

“My topmost priority is to deal with India’s massive social and economic problems, so that chronic poverty, ignorance, and disease can be conquered in a reasonably short period of time.” ~ Manmohan Singh

“Economic policy and decision making do not function in a political vacuum.” ~ Manmohan Singh

“The Indian economy grew at 5.5 percent, but if you look at the last 30 years – for example, 1960 to 1985 – the progress made by East Asian countries was phenomenal. In a single generation, they had been able to transform the character of their economy. They were able to get rid of chronic poverty.” ~ Manmohan Singh

“Unity and secularism will be the motto of the government. We can’t afford divisive polity in India.” ~ Manmohan Singh