Skip to content
You are here
Home > Famous Personalities > 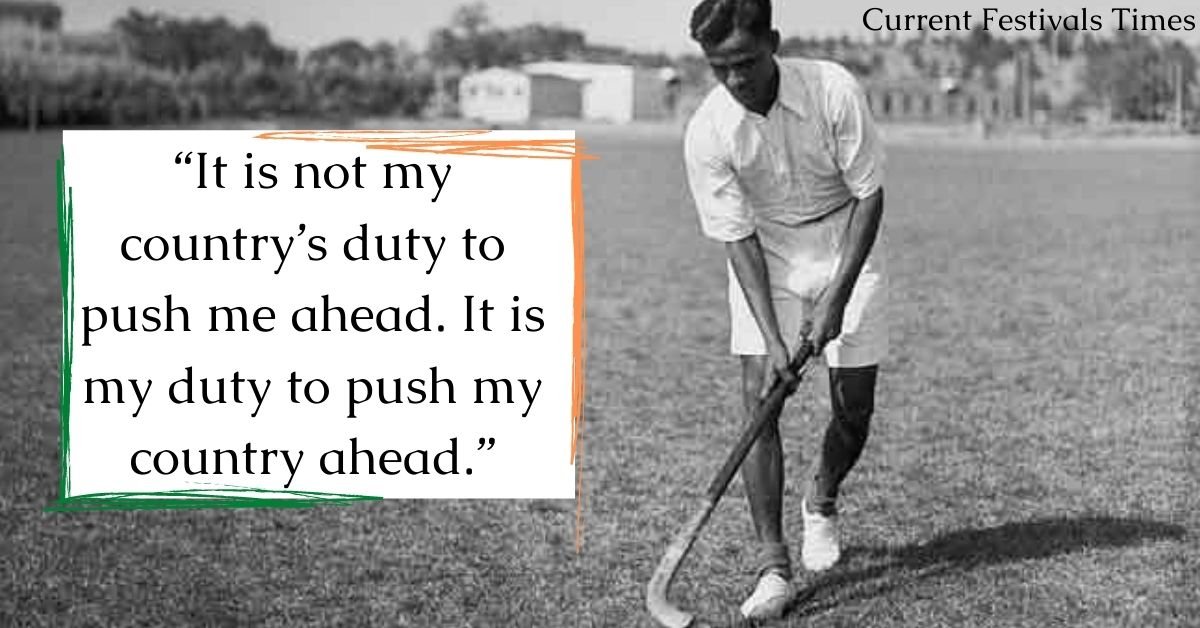 Major Dhyan Chand was a great magician of Hockey and he proved that with utmost efforts & determination you can be gain perfection to turn your work into unbelievable magic. So, let us read the 15 Top Dhayan Chand Quotes to remember him on this proud day!

“If you could not get a goal from that you did not deserve to be on my team.” – Major Dhyan Chand

“Dhyan Chand‘s story has inspired every generation of hockey players. And it should be taught in schools too so that all the kids also know the Indian sportsperson who was better than the rest of the world.” – Savita Punia

“Major Dhyan Chand was a live example of a true sportsman spirit and patriotism. He helped India in securing gold medals in Hockey in 3 Olympic games in 1928, 1932, 1936.” – PM Narendra Modi

“The Olympic complex now has a magic show too. Visit the hockey stadium to watch the Indian magician Dhyan Chand in action.” – German Media

“His real talent lay above his shoulders and he treated hockey as a chess game.” – Keshav Dutt

“He scores goals like runs in cricket.” – Sir Don Bradman

“The officials of the Netherlands broke his hockey stick to check whether there was a magnet inside his hockey or not.”

” It looks like he has some invisible magnet stuck to his hockey stick so that the ball does not leave it at all.” – About Dhyanchand

Nowadays I hear of the princely comforts provided for national teams traveling overseas, and fuss players raise if they happen to miss even a cup of tea! When we used to travel the name of our country and the game were the only two things that mattered. – Dhyanchand

You and your boys have done wonders to foster the game of hockey in our country I hope that you will return to India with good impressions and with the same feeling of friendship to the German hockey players as we feel towards you…Tell them how much we all admired the sill and performance of the prefect hockey they have shown us. – About Dhyanchand

In 1933, the Jhansi Heroes decided to participate in the Beighton Cup hockey tournament. My life’s ambition was to win the Beighton Cup, as I had always regarded this competition as the blue riband of Indian hockey. In my opinion, it is perhaps the best-organized hockey event in the country. Calcutta is indeed lucky that it has at least three of four first-class hockey grounds on the maidan, and this is a great advantage to run a tournament on schedule instituted since 1895, this tournament had a non-stop run. World War|World Wars I and II did not affect the tournament. Threats of Japanese bombs and actual bombings in Calcutta, while the hockey season was on also, did not prevent the tournament from being held. That being said, it is sad to think that the tournament had to yield to the communal frenzy, which gripped the nation in 1946-47.