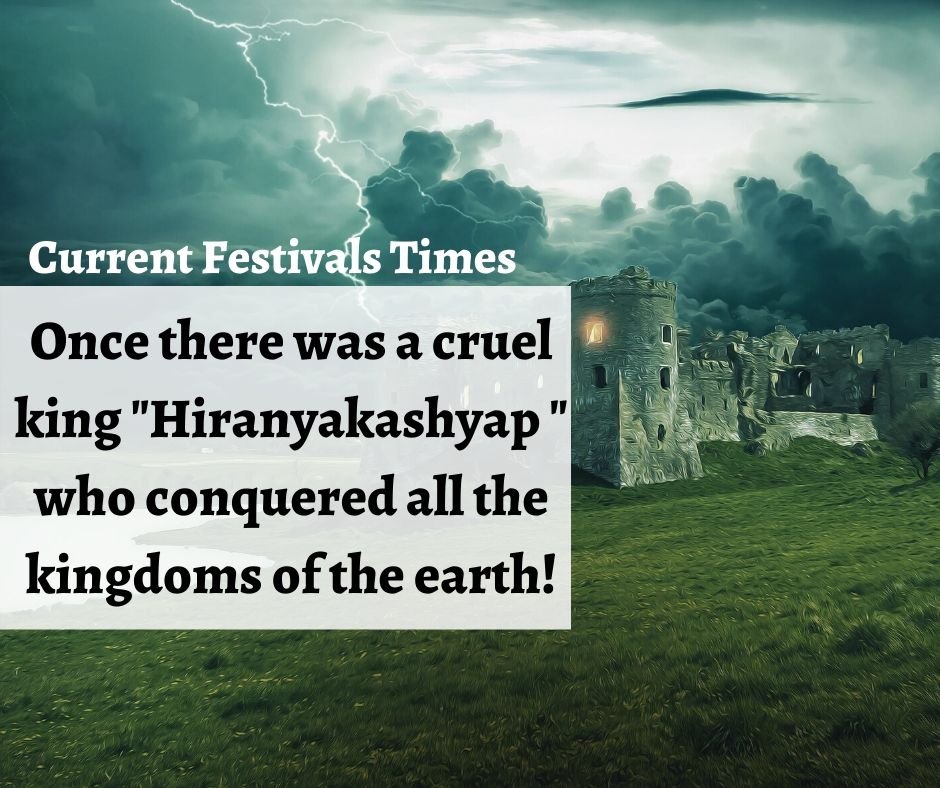 In this article you will know the true Holi Story with Pictures and will also get a reason to celebrate this beautiful & colourful festival.

Story Of Holi With Pictures

1 ) Once there was a cruel king “Hiranyakashyap ” who conquered all the kingdoms of the earth!

2) Because of his ego, he ordered everyone in his state to worship him only!

3 ) But his son, Prahlad became a true devotee of Lord Vishnu and rejected to preach his father!

4 ) Because of this, he tried to kill his son several times but each time lord Vishnu saved him.

6 ) Cleverly, Holika pursued Prahlad to enter into the fire with sitting on her lap.

Get your Child Amazing & Cheap Holi Products by visiting this article!

7 ) But the Holika didn’t knew that the boon worked only if she enetered the fire alone.

8) That’s why Holika died burning herself and Prahlad came out unharmed because of his exreme devotion towards Lord Vishnu.

Thus, the word Holi is extracted from Holika and is celebrated as the triumph of good over evil.

After reading the Story of Holi, you might have understand that this festival is celebrated as the victory of true devotee.

Celebration of this Majestic Festival

Just like the Holi story, people burn huge bonefires to enact the “Burning of Holika ” as a sign of victory of good over evil and on the last day of Holi people take a little ash of the bonefire to their homes because they believe that it will make their body pure and free of diseases.

Just like Diwali, there is tradition in Holi to clean and remove all the dirt from the surrounding which makes the makes the locality clean and disease-free.

If you want to impress your friends on Holi then Check out these beautiful Holi Wishes, here!

Holi is celebrated as a sign of victory of good over evil and also as a day to spread love and joy to each other.

There was a demon king Hiranyakashyap who because of his ego ordered everyone to preach & worship him only. But his son ” Prahlad ” was a true devotee of Lord Vishnu and refused to worship his father. Thus, Hiranyakashyap tried several times to kill his son but every time Lord Vishnu saved him because of Prahlad’s extreme devotion and love!