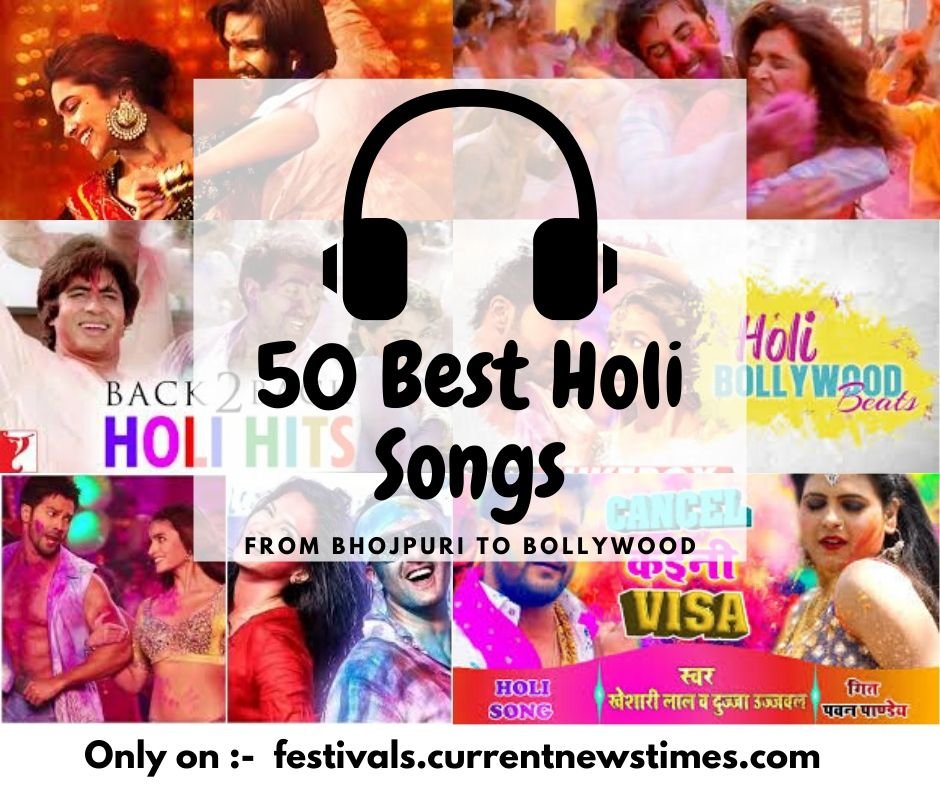 Double the Enjoyment of Holi by listening to these best Holi Songs specially for you.

So, what are you waiting for?

Connect your mobile to the headphones or speakers and Enjoy the best of best Holi Songs below!!

Holi celebration is incomplete without this song! Indulge in this spectacular Holi song sung by Amitabh Bachchan.

Colours, bhaang and some naach-gaana, Bollywood has immortalized the festival of colours with some flirting and these songs have always been a hit among the audiences.

Machayenge in bantai lingo is an expression to suggest “we’ll have a blast” , is a fun song with beachy vibes. Here, Emiway is welcoming his listeners/viewers to come join him at his very own party island and party with him.

Her mesmerizing eyes will leave you swooning. Lose yourself in the ‘Kajra Re’ Naina and enjoy the rhythmic beats.

You will love to dance on this song: Oh Ho Ho Ho

Sing along to the tunes of this dance number ‘Beedi’ from omkara featuring Bipasha Basu. The song is sung by Sunidhi Chauhan, Sukhwinder Singh, Nachiketa Chakraborty & Clinton Cerejo.

Presenting the hottest dance anthem of 2019 “O SAKI SAKI” full video from the movie Batla House, with the sizzling performance by Nora Fatehi. The song is sung by Tulsi Kumar, Neha Kakkar, B Praak. The track is recreated and written by Tanishk Bagchi. The song is originally composed by Vishal- Shekhar.

Nore Fatehi’s ” Dilbar ” will really take your “Dil” this Holi!

Want to dance on ” Tamncha”?

Get ready to groove on the tunes of TAMANCHE PE DISCO from movie Bullett Raja starring Saif Ali Khan, Sonakshi Sinha, Jimmy Shergill, Vidyut Jamwal and Others. The music is composed by RDB while lyrics are penned by Raftaar

This Holi Party is on My Mind

Presenting the full video of the biggest party anthem song “Party On My Mind” from the movie Race 2, Vocals are by Yo Yo Honey Singh, KK and Shefali Alvares. The music is composed by Pritam & Lyrics are penned by Prashant Ingole

‘Char Baj Gaye’ from ‘F.A.L.T.U’ is a true party anthem which got the whole world grooving, featuring Hard Kaurs rap. This Bollywood comedy is directed by Remo D’Souza and produced by Vashu Bhagnani.

Are you a Physcho Saiyaan?

Presenting the first video song “Psycho Saiyaan” from upcoming movie Saaho. It is a Multi-Lingual Indian Movie ft. Rebel Star Prabhas and Shraddha Kapoor, Directed by Sujeeth and Produced by Vamsi & Pramod. The song is sung by Dhvani Bhanushali and Sachet Tandon and composed and written by Tanishk Bagchi.

Presenting the full video of the song Kamariya sung by Aastha Gill, Sachin Sanghvi, Jigar Saraiya and Divya Kumar and composed by Sachin- Jigar from the movie Stree. Stree is a first of its kind horror comedy, inspired from a true phenomenon.

Aa To Sahii Lyrical Video | Judwaa 2 Songs (Lyrics /Lyrical Video) | Meet Bros | Neha Kakkar Presenting Yet another peppy track hits the charts from the Judwaa 2 madness! Watch the hilarious, ‘Aa Toh Sahi’ and get ready to be confused! Dive into the confusion of the notorious and smart duo.

Who can forget Guru Randhawa?

Nobody can forget “EK DO TEEN “

Presenting Ek Do Teen with lyrics featuring Jacqueline Fernandez. Mohini is ready to steal your hearts and burn the dance floor with her sizzling moves. Watch Ek Do Teen OUT NOW! Baaghi 2 is an action film produced by Sajid Nadiadwala and directed by Ahmed Khan. A Nadiadwala Grandson Entertainment production, presented by Fox Star Studios, the movie stars Tiger Shroff & Disha Patani in lead role. The movie is set to release on 30th March 2018.

Composed and written by ace songwriter and SME exclusive artist Vayu, with the sizzling vocals of SME India exclusive artists, Aastha Gill and Akasa, and some sick beats courtesy Dutch music producer, PURI, this scorcher of a track will definitely heat up dancefloors.

Presenting the second song “Haseeno Ka Deewana” with LYRICS from the upcoming Bollywood Movie “KAABIL” ,which is the story of a man who lived, laughed and loved just like everyone in this world.

With Hrithik Roshan & Vaani Kapoor on the dance floor, sparks will fly and how! Here’s the Ghungroo Song from the film ‘War’.

The latest track is sung by Sunanda Sharma, lyrics by Jaani, the song is recreated and given additional lyrics by Tanishk Bagchi.

Please Share it with your friends to make Holi awesome 🙂

And tell us in the comment box your favorite Holi Song!